(Mataró, november 28, 1883 - Barcelona, may 29, 1959)
Frank Marshall, the son of an English family that moved to Catalonia to work in the construction of a textile factory, was born in Mataró in 1883. As a child he already showed great musical talent. He began his musical education in his native city with maestro Teodor Solà Vendrell. Later he moved to Barcelona to study at the High Conservatory of Music of the Liceo with Professor Sanchez Cabañach and Professor Puyé. When he finished his degree he continued further training with Enrique Granados and, in 1907, was named assistant headmaster of piano studies in the Academia Granados.

At that same time, during those years,  he began his career as a pianist appearing in several European and American capital cities. In 1906, he gave some concerts in the Milan exhibition and in Germany, which allowed him to meet personalities of the piano world of that time such as the pianists Ferrucio Busoni and Emil von Sauer.

In 1907 he won the Ortiz Cussó Award at the Sobrequés I Reig Composition Competition with the piece 'Suite Catalonia'. The jury was presided by Granados himself. It was due to his close relationship with this composer that Frank Marshall became the legitimate continuator of this maestro's piano school through the Academia Granados. He perpetuated the principles of sonority and use of the pedal that Granados systemized in his pedagogic method. When Granados died, in 1916, Frank Marshall became headmaster of the Academia Granados until 1920, when he changed the name of the school to Marshall Academy.

He is the author of two pedagogical treatises: 'Practical study about 'Piano pedals' (1919) and 'Piano sonority' (1940), in which he applies his principles of sonority in the repertoire of each course. He maintained his relationship with the international music world throughout his life. In 1925 he made several recordings for the record company Wette-Mignon of Freiburg (Germany)

Between 1926 and 1927 Marshall took part in the Falla Festivals, which were held in Barcelona, interpreting the soloist part of the work 'Noches en los jardines de España' which he also played in Seville and Cadiz conducted by Manuel de Falla himself. In 1932 he was invited to be part of the jury of the international Piano Competition of Vienna and, in 1937, of the Frederic Chopin International Competition alongside Henry Wieniawksy, Clemens Krauss, Wilhem Kempff and Alfred Corcot. As well as carrying out his pedagogical work, he was also appointed president in Barcelona of the Musical Culture Association, an institution that was promoted by the Conciertos Daniel agency, which brought one of the most brilliant seasons of concerts to the Palau de la Música Catalana with performances by Claudio Arrau, Arthur Rubinstein, Wanda Landowska, Sergei Rachmaninoff, Yasha Heifetz among many others. Frank Marshall was maestro to a whole generation of Catalan pianists, among which should be mentioned Carles I Giocasta Corma, Mercedes Roldós, Maria Vilardell, Rosa Maria Kurcharsky, Rosa Sabater, Alberto Attenelle, Carlota Garriga and Alicia de Larrocha, who inherited the headship of the Academy from him.

He married Teresa Cabarrús, the daughter of French diplomats, who was a painter and a poet. They didn't have any children. Teresa Cabarrús supported the pedagogical work of her husband, organizing concerts and taking care of the courses of recitation and literature which complemented the musical studies given in the Academy. Thanks to his spirit, this school became a cultural reference in the Barcelona of the 40's and 50's. Frank Marshall died of a lung disease in 1959. 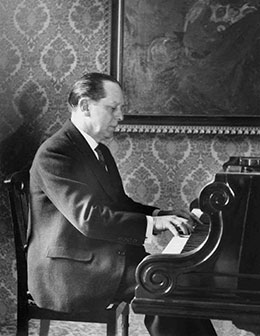